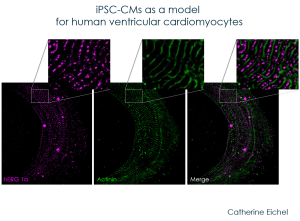 Every day, sudden cardiac death unexpectedly claims lives because of adverse drug reactions, inherited conditions, and environmental influences. Often, those lost are in their prime – seemingly healthy athletes, children, newborns, or even a developing baby in mother’s womb.

Much of the work in the Robertson lab focuses on the root causes of arrhythmias leading to sudden cardiac death. Twenty years ago we made a discovery that led to the development of a drug safety test that detects drugs that might trigger arrhythmias, which was a vexing public health concern at the time. We are now are working with industry and the FDA on ways in which the drug development pipeline can be expanded, while maintaining high standards that keep drugs safe.

One of our key experimental preparations is a kind of human heart-in-a-dish. Using a reprogramming technology that was developed here at UW-Madison by Jamie Thomson and Tim Kamp, human skin cells are tricked into becoming heart cells. The cells beat rhythmically and can be manipulated genetically and with drugs. We can record their electrical activity with patch-clamp electrophysiological techniques, and explore the underlying molecular mechanisms regulating membrane excitability. With this preparation we hope to learn why some people are susceptible to the risk of sudden cardiac death and others are not, in part by using patient-derived heart cells. We used this technology, known as induced pluripotent stem cells (iPSC), to understand the subunit composition and functional properties of channels underlying the cardiac repolarizing current known as IKr. IKr, made up of hERG protein subunits, is a major target for diseases causing life-threatening arrhythmias.